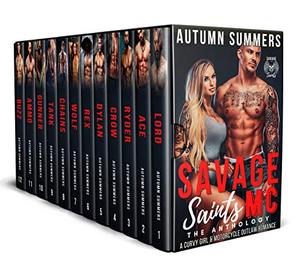 Do you love action-packed motorcycle romance, hot and steamy sex scenes, and a happily ever after?
Follow the Savage Saints through twelve thrillingly exciting stories!


Mandy escapes her parent’s superficial billionaire lifestyle by hitching a ride with the mysterious Lord – a rival MC gang hot on his heels. Danger brought them together, but will it tear them apart?


Ace’s rash decision to kidnap the skittish Bambi from a Cartel bar could get her killed. Bambi struggles to trust this impulsive stranger, but could he be her saviour?


Ryder and Red were just friends until a paranormal experience changed Ryder’s life. With Red being the only one to understand, they only get closer. Could they ever be more? Nothing would be the same again…


Crow’s lost without a patch on his back or a bike beneath him. Having lost the only life he’d ever known, he’s uncertain how he fits into the world… then he meets the beautiful Brooklyn.


Dylan’s on a path of destruction, haunted by his recent military past. However, he begins to change his ways after crossing paths with Leah – an angel who rids him of his demons.


After being saved from an abusive biker by her drug dealer, Rex, Leah robs him of his stash and overdoses. Because she’s from a rival club, Rex has no idea what he should do – or what he should risk to care for her.


Wolf’s been keeping a deep, dark secret from his MC. The moment Amber walks into the clubhouse, the one woman who could expose him, his position’s threatened. But Wolf knows that she, too, is hiding her true self.


Chains is facing life in prison for violent crimes. Ada, a highly respected lawyer, is the only one who could save him – that is, if she isn’t killed first. Under ordinary circumstances their worlds wouldn’t collide, but they need each other.


Rose thought her high school sweetheart, Tank, was dead. So, when he shows up at the bar she works at, she’s overwhelmingly happy to see him. Noticing that he’s having trouble readjusting, Rose encourages him to join a motorcycle club with the hopes that it’ll give him what he needs. Can she help him?


Gunner would’ve been living the American Dream if it weren’t for Trixie. Because of her, he fought for his life in the Vietnam war. Now her life’s in danger, and Gunner is the only one who can keep her safe. Can he forget the past and protect her?


The MC were warned to stay away from Roxy, but Ammo just can’t resist his best friend’s little sister. Their love is forbidden, and Roxy can’t bear to be the cause of a rift in the club, so can they let themselves give into desire?


Minnie isn’t Buzz’s type, but he falls for her anyway. Though she’s been asking a lot of prying questions about the club and his position as VP, he tries to ignore his suspicions. But, if he’s right, her secret could cost him his MC, and even his life.
more
Amazon Other stores
Bookmark Rate Book

All books by Autumn Summers  ❯