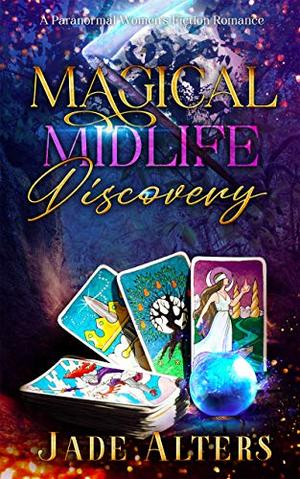 Silas’ ordinary life selling crawfish suited him just fine until one day, a strange psychic accosts him on the street, a huge fire mysteriously breaks out at his office and he finds himself spending the day at a funeral parlor, very much against his will. Suddenly, Silas’ life is taken over by Arla and Zona Alcaraz, two strange sisters who insist they’re witches and magick is quite real.

Now, he’s contending with allegations of violating magickal law, haunted spirits and a curse that’s followed him from beyond the grave.

To complicate matters, Silas finds himself strangely drawn to Miranda, the very same psychic who practically attacked him in broad daylight. She’s got a whole host of her own problems, personal and otherwise.

Bound by more than coincidence, can the four of them find a way for Silas to appease the magickal authorities and escape the fate that threatens to condemn him?

Magical Midlife Discovery is a stand-alone Paranormal Women’s Fiction Novel with a HEA featuring a hero in his forties who happens to find love in more ways than one and a sweet but strong heroine in her forties that helps him realize each of us controls our own destiny. The books can be read in any order and are part of the same supernatural universe. Filled with a mix of real and mythical references to magical city of New Orleans, lovers of the Crescent City are guaranteed to be delighted.

The 'Reapers of Crescent City' series

All books by Jade Alters  ❯