Snorkeling with a Saw-shark (Beneath Aquatica's Waves #9) 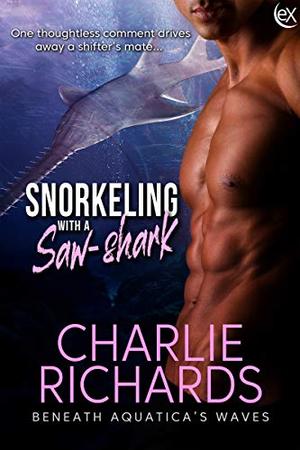 World of Aquatica: When one thoughtless comment drives away a shifter’s mate, he finds his patience tested as he attempts to correct the misunderstanding.


When Westram McKinley met Noah Redruvian, an uncouth offer for a roll in the hay has Noah painting him with the same brush as his ex-boyfriend—an unfaithful playboy. As a nearly two-century-old longnose saw-shark shifter, he did have plenty of experience, but nothing could have been further from the truth. Noah was his mate. Westram would never stray from the man. As weeks without his mate turn into months, Westram’s shark begins to pine, becoming increasingly volatile, only calmed with the help of his alpha, Kaiser. The continued updates about Noah from Kaiser’s mate, Arthur—who is good buddies with the man—also help keep Westram from losing his mind. When Arthur comes to Westram and shares that Noah hasn’t answered his calls in two days, Westram doesn’t waste a second. He heads to Noah’s, ready for any type of vitriol the distrustful human throws at him. To his dismay, when he arrives, Noah is injured and nearly catatonic, fear oozing from every pore. Can Westram figure out how to soothe Noah and get his mate to talk to him before whatever danger had terrorized him returns?
more
Amazon Other stores
Bookmark Rate Book

The 'Beneath Aquatica's Waves' series

Similar books to 'Snorkeling with a Saw-shark'

Buy 'Snorkeling with a Saw-shark' from the following stores: