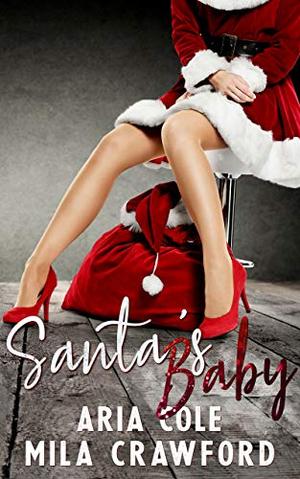 For the first time ever, enjoy a little sugar and spice from Aria and Mila with a few of our favorite Christmas stories all in one bundled edition! From first love to rekindled flames, romance is on the menu this holiday season. Hold onto your candy canes, if you don’t like over-the-top men who fall hard and fast, turn back now. This holiday season you’ll lose more than your Christmas stockings and light up brighter than your tree when you fall in love with these holiday treats.
-
In Cheeky Christmas, Everly Grayson is sick of her small life in a small town. She dreams of bigger things, so when an opportunity to au pair at sprawling country estate in rural England comes along, she jumps at the chance. Her new adventure loses some of its shine when she finds out her new boss, wealthy single dad Mason Kingsley, is a surly and foul-tempered ogre though. But despite his temperament, he dominates her every waking thought. Little does she know that he is just as affected by her.
-
As the head of the ER at Snowpass Mountain Hospital in Under the Mistletoe, Aurora Snow finds herself in the hands of a every mouthy carpenter who lands in her emergency room during the holiday season. You won't find Declan Callaghan on Santa's nice list, and the devilish dimples and twinkle in his eye leave Aurora wondering what it would be like to be at the top of this cocky carpenter’s naughty list.
-
As the owner of Whiskey Heart Distillery in Whiskey & Mistletoe, Owen Brewer has spent his life crafting quality spirits. With whiskey-soaked memories of the one girl who got away, he’s retreated to the solitude of his business, but his exacting standards and firm control are about to be tested by the one holiday guest he never saw coming. Misty Armstrong's life has been in shambles, she’s ready for a reset—even if it means sacrificing her last meal this Christmas. But just when she thinks she’s been through it all, another setback forces Misty to confront the one person she’d rather be running away from this holiday season.
-
After a winter storm freezes the pipes at her small-town dog grooming business, Sandy comes face-to-face with Bryce, the only plumber in town who’s willing to fix her problem in The Holiday Arrangement. In exchange for his help, Bryce wants only one thing. A date with her. Now that she’s in his system there’s no way he’ll be able to get her off his mind… or walk away. With another blizzard bearing down and the threat of being stranded together a reality, it isn't long before the heat rises as they head for a night they’ll never forget.
more
Amazon Other stores
Bookmark Rate Book

Buy 'Santa's Baby: A Christmas Anthology' from the following stores: