For All My Relations: A Time Travel Story (Book One) 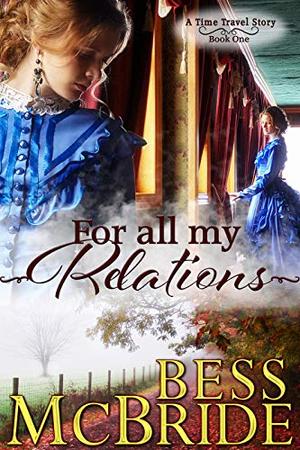 What would it take to go back in time and fix the past? Not your past, but that of your ancestors? As an amateur genealogist with a passion for my ancestors, I’ve long wished that I could go back in time and fix what went wrong—be it accidents or illness. Looking back on our ancestors’ lives, we are able to see how their lives began and how they ended, all in a matter of minutes by reviewing the records of their existence—sources such as birth certificates, marriage certificates, death certificates and newspaper clippings, to name a few.

My second great-grandmother and her young son died of typhoid fever from eating tainted ice cream. This story and the ones to come in the For All My Relations series of time travel stories are the only thing I can do to make sense of their losses. I write these For All My Relations.

After years of scouring online genealogy records and databases, Annie Warner, longtime genealogy buff, discovers her second great-grandmother’s death certificate from Lancaster, Pennsylvania. Cause of death: Belinda Sellers died in 1913 from hemorrhaging due to typhoid fever. She was only thirty-four, a mother of six young children. Ted, her six-year-old son, died only days later from the same typhoid fever. An email exchange from a distant cousin revealed that their mutual ancestress had contracted typhoid fever from eating tainted ice cream.

Annie grieves for her second great-grandmother and wonders at the awful miracle that her own great-grandmother, then thirteen, survived. Why? How? Mostly, why? Life is so tenuous, so fragile, so random. Annie, whose parents died when she was in her early twenties and whose only sister died when Annie was fifteen, knows that better than most.

For years genealogy has been Annie’s way of recreating a family, a sense of belonging. She’s met cousins online along the way, but most are too busy to incorporate another family member in real time. The occasional annual email is enough. Annie longs for so much more.

Even a burgeoning relationship with a long-lost love can’t satisfy Annie’s desire for family.

She studies the death certificate wishing that she could go back and warn her second great-grandmother, Belinda, of the danger. What if she could save her life and that of her young son? What if?

The world shifts on its axis or time turns on itself, and Annie finds herself thrown back in time to 1913, just in time to warn her second great-grandmother. Can she change the past? Is it wise? Without a copy of the death certificate, how can she convince her family that she can predict the future? And how does she get back to the lost love whom she found again after years apart?

For All My Relations begins Annie’s adventures into solving past tragedies, meddling in love lives and bringing families together, all the while hoping she doesn’t obliterate her own future existence.
more
Amazon Other stores
Bookmark Rate Book

Similar books to 'For All My Relations: A Time Travel Story (Book One)'

More books like 'For All My Relations: A Time Travel Story (Book One)'   ❯

All books by Bess McBride  ❯

Buy 'For All My Relations: A Time Travel Story (Book One)' from the following stores: