Hell in a Handbasket: A Demon Romance (Sin Demons #2)

by Harper A. Brooks, Mila Young 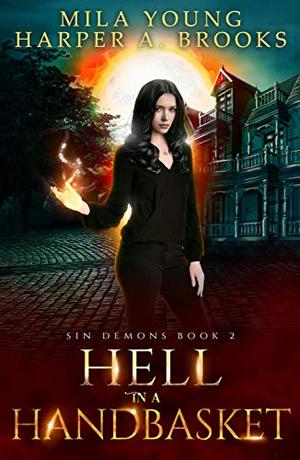 See no evil. Hear no evil. Speak no evil. Sleep with no evil… If only it were that easy.

Between being kidnapped by a psycho dragon-shifter, influenced by ancient relics, and fighting for my freedom, I’d say my hands are full. But really, my troubles have just begun.

Cain, Dorian, and Elias are wickedly dangerous, scorching hot, and all too tempting. They’re devils in disguise. Literally.

I don’t know why they’re collecting these relics, but it looks like I’m not the only one with secrets. Despite all the risks, I might be falling for the three of them. But there's a good chance this Hellish relationship ends up being the death of me.

To make matters worse, there may be something more to my shadow than I originally thought. Something evil that’s set on taking over me entirely if I let it. With each passing day, I find myself falling deeper into its darkness and further under the demons’ deadly charms.

There’s no other way around it... Things are quickly going to Hell in a handbasket.
more
Amazon Other stores
Bookmark Rate Book

Similar books to 'Hell in a Handbasket: A Demon Romance'

More books like 'Hell in a Handbasket: A Demon Romance'   ❯

Recent books by Harper A. Brooks

Buy 'Hell in a Handbasket: A Demon Romance' from the following stores: