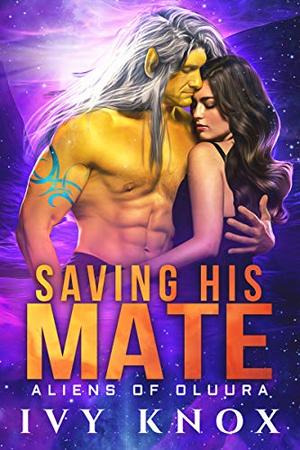 He's big. He's got gold skin and emerald eyes. And he just outbid a room full of aliens to win me.

Chloe has hit rock bottom. Her boyfriend cheated on her. Then he dumped her. And just when she thought it couldn't get any worse, she's kidnapped by aliens and shoved into a glass cage with two other terrified human women.

The three of them are sold at auction to the highest bidder, who just happens to be a massive, seven-foot-tall gold-skinned alien named Varrek. He spares no expense to buy Chloe the moment he lays his eyes on her. He knows she's his mate, but he also knows he can never have her because of his tragic past, and a dark secret he's kept for years that could threaten the safety of everyone he cares about. Varrek vows to take her back to his planet and keep her safe...nothing more.

But the more time they spend together, the stronger their bond becomes. And the harder it is for Chloe to imagine going back to Earth.

Will they succumb to their desires? Or will Varrek's secret tear them apart?

Saving His Mate is a full-length standalone sci-fi romance featuring a gold-skinned alien with breathtaking eyes and a secret past that threatens to destroy his future, a curvy 35-year-old heroine who is sick of feeling broken and is determined to reclaim her independence, and an attraction that neither of them can deny.

If you like huge, sexy aliens, steamy love scenes, and happily ever afters, you'll love this series!

Buy 'Saving His Mate: Aliens of Oluura: Book 1 (A Sci-Fi Alien Romance)' from the following stores: