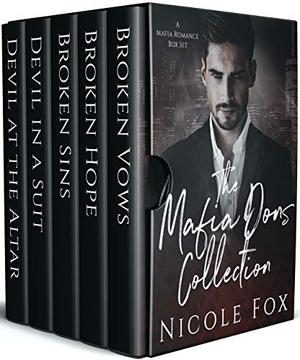 FIVE complete mafia romantic suspense novels from two of Nicole Fox’s bestselling mob boss billionaire series.
Give yourself up to the powerful touch of the dons in:

She’s my fake wife, my property… and my last chance at redemption.
She’s beautiful. An angel. I’m dangerous. A killer.
She’s my fake bride for a single reason – so I can crush her father’s resistance. Until I discover a past she’s been hiding from me.
Now, I know that our wedding vows are not enough. I need to make sure she’s mine for good.
A baby in her belly is the only way to seal the deal.

They kidnapped my wife and baby. I’ll go through hell to get them back.
Eve was a pawn in a violent game. Until she became the queen of my world.
I tried to keep her safe. Locked away like a princess in a tower. Up there, she was protected from everything…
Except for me.
Now, I’m knee-deep in the underworld. I’ll do whatever it takes to rescue my family: Lie. Steal. Kill.
And once this is all over… Once my wife and baby are back in my arms…
I’ll slaughter every man who laid a finger on them.

My father’s enemies have claimed me for revenge.
Luka Volkov’s enemies came for me in the night. Four of them: Vito, Mateo, Leo, Dante. Each is darker and more savage than the last.
The Bianci brothers plan to use me for their vengeance. But not before they use me for their pleasure.
In their hands, I will be bent. Broken. And after each midnight session, they promise me this…
By the time it’s all over, I’ll be begging for more.

DEVIL IN A SUIT

I’ll keep her safe from everything… except myself.
I’m a billionaire mob boss with a thirst for power. She’s a broken girl fleeing from a past she can’t escape.
We were never meant to be. But fate wouldn’t take no for an answer.
A one-night-stand lit the fire. An unexpected baby turned it into an inferno.
Now, we’re both trapped by the flames. Trapped in this dance. Trapped in the darkness.
She says she’s not afraid of me. But the more she learns, the more she realizes…
She should be.

DEVIL AT THE ALTAR

A ruthless mob boss buys an innocent fake wife.
Before my father gives me the throne that’s rightfully mine, I must fulfill one condition:
I must find a wife.
Dani is the perfect target. She says she doesn’t need me.
But if there’s one thing in this world I understand, it’s desire.
And that’s the only weapon I need to twist her under my control.
Until, with one fell swoop, my entire world comes crashing down.

Get two of Nicole Fox’s bestselling series—the VOLKOV BRATVA TRILOGY and the DE MAGGIO MAFIA DUET—in one collection! What are you waiting for?

All books by Nicole Fox  ❯