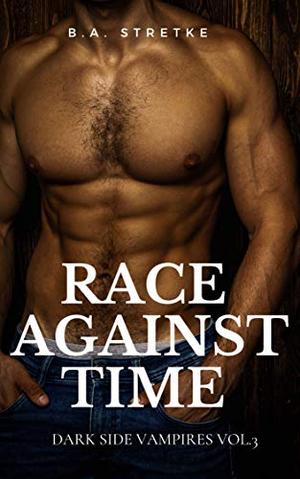 “The answer is yes. To all of your questions.”

Damien Forsythe is on the run. He saw something he shouldn’t, something he can’t even begin to explain. He can’t talk to anyone about it; why would they believe him if he did? He can’t talk to his sister Amy; she was there but claims nothing happened. Is he really losing it, or did he actually see those men turn into beasts?

Race Buchannan is the second in command at the Dark Side in St. Louis, Missouri. He’s been at John Dyer’s side since the beginning, when they were cast out by their home coven because they were descended from a sacred bloodline. Their Master deemed them both threats to his rule and sent them into the wilderness. Now, they control St. Louis and all of Missouri. They only answer to one man, the Master of Crimson, Alexander Stone. He’s not their Master, but they acknowledge his rule in the Vampire world. When he comes calling asking for a favor, Race and John are quick to help. What Race doesn’t know is that this mission will lead him to his destiny.

The road isn’t easy, Damien is a man with baggage and scars, but Race isn’t the kind of man to give up, even when the bullets start flying. Damien saw something he shouldn’t have, and now his very life rests in Race’s hands. It’s a race against time to their happily ever after.
more
Amazon Other stores
Bookmark Rate Book

The 'The Dark Side' series

Similar books to 'Race Against Time: Dark Side Vampires Vol. 3 (The Dark Side)'

More books like 'Race Against Time: Dark Side Vampires Vol. 3 (The Dark Side)'   ❯

All books by B.A. Stretke  ❯

Buy 'Race Against Time: Dark Side Vampires Vol. 3 (The Dark Side)' from the following stores: