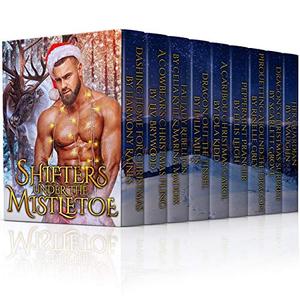 Shifters in Love brings you another holiday anthology from your favorite authors. This is a collection of brand-new shifter romance stories in time for Christmas. We hope you enjoy our sassy, loving, smart, and sweet heroines as they fall for the man of their dreams and get their very own holiday present in the form of true mate love.

A Cowbear’s Christmas Fling - Liv Brywood
Amelia’s Christmas vacation to Huckleberry Valley takes an unexpected turn when sexy bear shifter Luke Evans catches her eye. She doesn’t have time for romance, but he’s impossible to ignore. With the help of a little mistletoe magic, he’s determined to claim her as his fated mate.

A Caribou Christmas Carol - Lola Kidd
A last minute road trip leaves shifter Kary Doyle in a sticky situation. He thinks he’s found his mate but she’s a tourist from out of town. With her trip coming to an end, can he find a way to tell her how he feels without scaring her away?

Her Guardian - V. Vaughn
One avalanche. Two strangers. Three days until Christmas. Marjorie reluctantly went to the mountains of Colorado for the holidays to unplug from taking care of everyone in her werebear clan. The last thing she wanted was to end up with someone taking care of her.

Peppermint Prancer - Ellis Leigh
My job as a kitchen elf was easy until I was called to work in the training barn with the reindeer. Yes, those reindeer. Now I’m baking protein bars, worrying about things like carb loading, and doing my best not to obsess over one of the original sleigh pullers. The one with the graying hair who won’t stop flirting with me. Christmas is coming, and I know exactly what package I want under my tree.

Dragon Out The Tinsel - Julia Mills
One Wolf Princess. One amazing Dragon. A Destiny neither could’ve ever imagined. They may have waited thirteen years to be together but saving all they know and everyone they love is the only way these Fated Mates will get their well-deserved happily ever after and a very Merry Christmas.

Pirouetting Around the Dragon - Rinelle Grey
Helios has far too much on his plate for a forbidden romance with a very beautiful—and very human—ballerina… If Helios and Piper want their happily ever after, they’ll have to fight for it—and it won’t come cheap. But that shouldn’t be a problem for a dragon billionaire, right?

Fae Lady Rebellion - Celia Kyle & Marina Maddix
Chafing under the watchful gaze of her overprotective big brother, Wren Oberon has to use all of her fae powers to get her sneaky-sneak on so she could attend the holiday party of the year at Othercross. Now she finds herself in a compromising position with no help in sight--until some random wolf shifter comes to her aid in a most dramatic fashion. Can she figure out a way to escape her brother's enchantments or will she live the rest of her life wondering what might have been?

Dashing Home for Christmas - Harmony Raines
Reindeer shifter Dash is traveling home to Wishing Moon Bay for Christmas. One phone mix-up later and he has the best Christmas gift ever. His mate. But he soon realizes he will have to sacrifice his own happiness to make Penny’s Christmas wish come true.

Dragon’s Christmas Surprise - Scarlett Grove
350-year-old billionaire dragon Erik Sorenson is not a fan of Christmas. When a squirming bundle shows up on the firehouse steps, tinsel hanging from the firetruck is the last of his worries. He needs a nanny and fast. Daphne Young arrives for the interview wet and hungry and smelling like his mate. It’s then that Erik realizes he may need to change his mind about Christmas.
more
Amazon Other stores
Bookmark  Rate:

'Shifters Under the Mistletoe: Holiday Multi-Author Box Set' is tagged as:

All books by V. Vaughn  ❯

Buy 'Shifters Under the Mistletoe: Holiday Multi-Author Box Set' from the following stores: