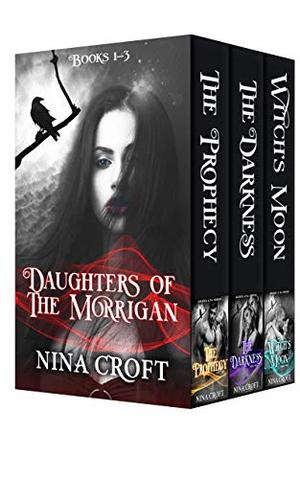 The Prophecy
Whoever sacrifices the virgin, Raven Cole, on her twenty-first birthday will achieve a great victory in the war between good and evil.
That’s bad news for Raven. Half-vampire, half witch, and cursed from the moment she was born, Raven has been a prisoner of the fire-demons for the last seven years. Now, as her twenty-first birthday approaches, time is running out.
Kael Hunter believed he would do anything to stop the fire-demons from winning. Until he saw her. Now, rather than kill the alluring vampire himself, Kael has another plan: to prevent the prophecy by taking Raven’s virginity.
But Raven is prepared for death not seduction. Can Kael use their one night of passion to convince her she has a future – and that he should be a part of it?

The Darkness
All magic has a price. And now the balance is overdue.
A witch with the power to see the future, Gina led a sheltered existence until the vampire, Darius Cole, crashed into her life, abducting her, seducing her, forging an emotional bond between them. Then circumstances tore them apart and the bond faded. Until twenty-one years later when they are drawn together to save their daughter.
But while their passion is rekindled and the bond renewed, Gina can offer Darius nothing, and she feels his bitterness and the Darkness within him, threatening to take control. Only she has the power to draw him back, but how can she when her very life is forfeit?

Witch's Moon
A witch and a werewolf—a match made in hell.
Regan is about to play a leading role in someone’s plans for world domination. And all they need to do to ensure her cooperation is bite her.
Regan doesn’t do scared. It’s not who she is. But right now, she’s panicking. Being a werewolf is dangerous and one wrong step could mean the End of Days. And the only person who can help is the stunningly gorgeous, embittered son of the werewolf who bit her.
Caleb Stone wants an ordinary life. After a horrendous childhood, he fled the pack and now does a pretty good job of pretending he’s human. Self-delusion at its best. The last woman he wants to get involved with is a witch turned werewolf. However explosive the chemistry between them.
But soon it becomes clear that Regan and Caleb need each other, and together they’re going to uncover secrets that will turn both their lives to chaos.
more
Amazon Other stores
Bookmark Rate Book

Similar books to 'Daughters of the Morrigan Boxed Set:'

More books like 'Daughters of the Morrigan Boxed Set:'   ❯

All books by Nina Croft  ❯

Buy 'Daughters of the Morrigan Boxed Set:' from the following stores: