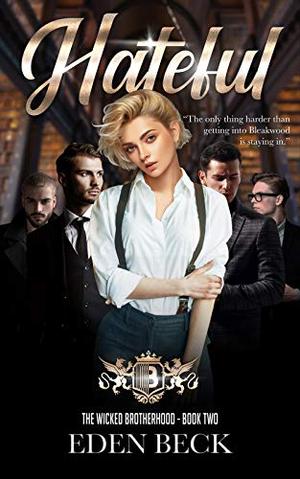 I thought I was finished with The Wicked Brotherhood.

But it seems The Wicked Brotherhood isn’t finished with me.

And they aren’t the only ones.

I survived my first semester at Bleakwood. Barely.

Now I just have to do it again.

From the moment I step back into these hallowed halls, it’s clear that it’s not going to be any easier the second time around. Not when it isn’t just The Brotherhood who suddenly has it out for me.

Ever since I arrived at Bleakwood Academy for Boys, someone has been trying to use me, so it shouldn’t come as a surprise when Dean Robin—or Headmistress Robin, depending on who you’re talking to—is the next to jump in line.

What she’s asking me to do will put me and quite possibly the whole future of Bleakwood in jeopardy, but I have no choice but to help her or she’ll expose me for what I really am.

If Jasper and The Brotherhood don’t do it first.

Hateful is a full-length bully romance novel with multiple love interests. It’s the second book in the Wicked Brotherhood trilogy, a contemporary enemies-to-lovers series where the main character has no intent to choose between the men who inevitably end up falling for her...after they’ve paid their penitence, of course.
more
Amazon Other stores
Bookmark Rate Book

All books by Eden Beck  ❯