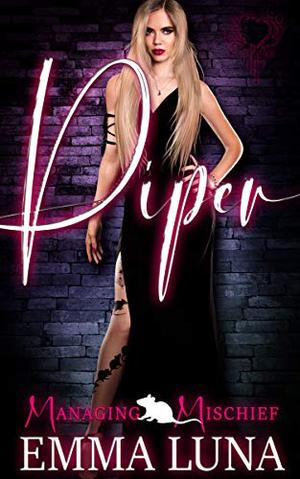 How far would you go to get the family you crave?

Piper Newton is a respectable person in the community, or at least that's what she wants people to think. Raised by a crack whore mother and in constant fear of her disgusting pimp boyfriend, Piper never knew what true family was. After a life changing event, she meets Reggie who changes her life forever. Finally having the family she longed for all her life, Piper will go to any lengths possible to keep them safe. Until she meets Ollie.

Ollie Parker craves being part of a family again after his is tragically stolen from him. When he meets Piper she offers him the world, but it comes at a price. Ollie discovers that some prices are harder to pay than others, and he must decide if Piper and his new family are worth the cost.

Piper is the first book in the new Managing Mischief series. This crazy, gritty, and sexy, dark romance by Emma Luna is torturously good and you don't want to miss out.

Buy Piper now to find out what price you have to pay to join Piper's Mischief.

Author Note - this book is intended for readers over the age of 18. It features scenes that maybe a trigger for some people. Please email for more details.

Piper was originally released as part of Torture: A Charity Halloween Anthology but it has been extended, edited and an epilogue added to develop it into the first book in the Managing Mischief series.
more
Amazon Other stores
Bookmark Rate Book

Buy 'Piper' from the following stores: