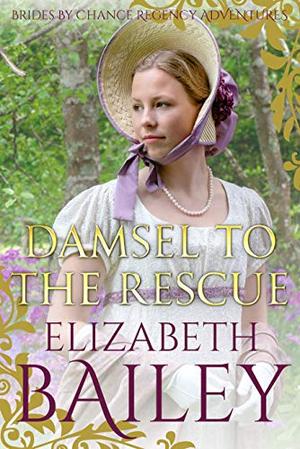 Delia must put her courage — and her heart — to the test…

After four years on the marriage mart, Delia Burloyne despairs of ever meeting her match and believes she has a dull future ahead of her.

But when her coach is held up by armed men, she is thrust into a dangerous adventure.

After running into the forest to hide, Delia stumbles across Giffard Gaunt — a long-lost earl who has been usurped and now fears for his life.

On hearing his tale, she soon becomes embroiled in his quest to reclaim his rightful inheritance.

But faced with Giff’s reckless nature and roguish charm, Delia begins to think she has taken on more than she can handle…

DAMSEL TO THE RESCUE is the sixth book in the Brides By Chance series, an enchanting set of Regency romances set in Georgian England.

The 'THE BRIDES BY CHANCE REGENCY ADVENTURES SERIES' series

Similar books to 'Damsel To The Rescue'

Buy 'Damsel To The Rescue' from the following stores: