An Omega Prince for Christmas: an MPREG Holiday Romance

by Harper B. Cole, Kallie Frost 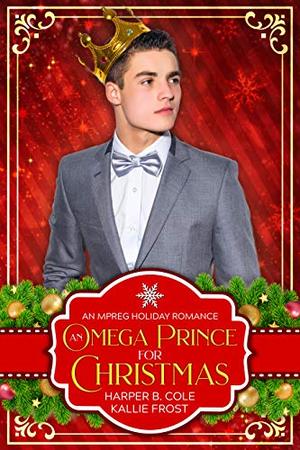 Not all Christmas presents come tied up in a bow.

Omega Prince Linden is poised to be king of Frostbourg, the Christmas Capital of the world. His life is filled with Christmas, Christmas, and more Christmas, but never the Christmas magic he has grown up hearing about. At least he’s not the one being forced to marry a total stranger based on some stupid bloodline match. Nope, that is left for his twin sister. Being the loving brother he is, Linden offers to help her out of the predicament. What’s the worst that could happen?

Alpha Jasper Snow feels like he has Christmas in his blood—it’s even in his name—but he’s stunned when a DNA test proves him right. Suddenly, instead of spending a miserable Christmas alone with nobody but Blitzen, the adorable dog he can barely afford to feed, Jasper finds himself on an all-expense paid, dream trip to Frostbourg, by invitation of the Queen herself. Sharing a room with a handsome tour guide is icing on the gingerbread cookie, little does he know his guide isn’t quite who he claims to be.

Once Linden and Jasper meet, sparks fly and feelings aren’t the only thing growing. Now the Prince and his true love need to figure out how to turn their one night into their happily ever after. While they’re at it, maybe Jasper can teach Linden the true meaning of Christmas.

An Omega Prince for Christmas is a sweet with heat M/M mpreg holiday romance with a royal flair. It features a handsome prince who is quite charming, his micromanaging mother, an alpha discovering who he is, true love, Christmas magic, a surprise baby, and the misunderstanding that almost ruins everything.
more
Amazon Other stores
Bookmark Rate Book

Similar books to 'An Omega Prince for Christmas: an MPREG Holiday Romance'

More books like 'An Omega Prince for Christmas: an MPREG Holiday Romance'   ❯

Recent books by Harper B. Cole

All books by Harper B. Cole  ❯

Buy 'An Omega Prince for Christmas: an MPREG Holiday Romance' from the following stores: