From the Stars We Stole 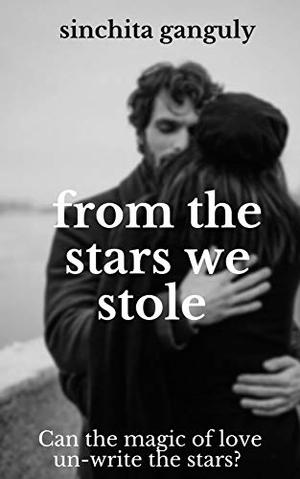 Sia Shetty, a vintage auto restorer. To Oumkar, she is only a proud, wealthy, preachy idealist, far removed from the real world. She stands towering above the crowd, observing life from a safe distance, neither participating in it nor being affected by its violent ebb and flow. But he is the man who believes the world to be nothing but an illusion! Is Sia’s unflinching composure an illusion too? Is it the quietude of a rare kind of heroism acquired after battles fought and won away from all eyes? Why does he see her repeatedly in the eye of the storm? Why does her blinding light remind him of his own dark battles in which he had surrendered his faith? Why does he crave her calm but is roused by her silent call to action against the exhausting nightmare he has turned his life into?

Oumkar Shenoy, a magician who does not believe in magic. To Sia, he is that one lingering memory on whose foundation she has built her entire life, but one that is now shrouded in scandals, mired by tales of greed, sleaze, and crime. Yet, he laughs at that world which has loved and hated him equally. He spurns Sia’s hero worship, ridicules her convictions, and calls her God, his Evil. Why then does she stay awake all night, filling the pages of her journal about him? Why does she want to run away from him, only to hide behind the closed doors of her heart and think about nothing but him? Why does his touch, intended to hurt, heal?

As Oumkar and Sia rediscover their own forgotten story that has survived time, distance, and silence, they must also rise to the greatest test of faith – the trial of destiny.

Can the magic of love transform fate? Or what’s written in the stars can never be un-written?
more
Amazon Other stores
Bookmark Rate Book

Similar books to 'From the Stars We Stole'

More books like 'From the Stars We Stole'   ❯

Buy 'From the Stars We Stole' from the following stores: