by Rae B. Lake 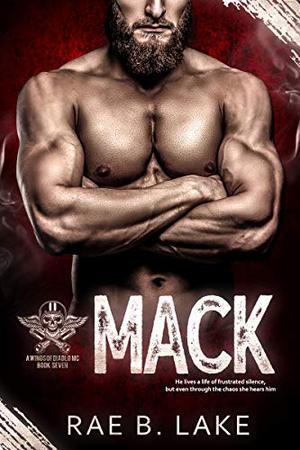 Mack
I’m the silent member of the Wings of Diablo MC club. I’m the one watching you from the corner, the one who won’t hesitate to put a bullet between your eyes. The last club I was part of was a shitshow from start to finish, so when the WOD boys offered me a place in their crew, I snatched it with both hands. I thought this crew would be different, I thought they would be better. Being the one no one expects to talk works to my advantage. I see everything and I can see the fucked up path my brothers are on, the foul alliances we have made, and even the snakes hiding in our own ranks, but they don’t. Now we have a refugee that refuses to play nice with anyone, Siren. She’s part of the mess that Ink was in, but she sees what I see. The storm on the horizon and a family about to be torn apart.
Siren
I feel like I’ve gone from one nightmare to another. After years as the Giles’ captive I’m free, yet I feel like I’m suffocating. I’ve been nothing but a killer and warm hole for so long I don’t know how to be free anymore. When I hopped in the trunk of the car, I saw it as a way out. I didn’t think about what I would do when I got here. I’m staying with the men at the Wings of Diablo MC and though I want to believe they mean well, I’d stick an icepick in my own eye before I trust them. Mack is who they’ve assigned to acclimate me to my newfound freedom, but he has more pressing matters to attend to, like trying to convince his club that they have all become part of the problem instead of the solution they once were. An enemy of thier so-called allies devastates the tight knit club, but I’m used to this. In fact, chaos and devastation feel just like home.
more
Amazon Other stores
Bookmark Rate Book

Similar books to 'Mack: A Wings of Diablo MC Novel'

Recent books by Rae B. Lake

All books by Rae B. Lake  ❯

Buy 'Mack: A Wings of Diablo MC Novel' from the following stores: