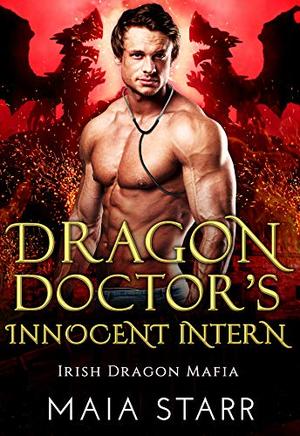 In an attempt to protect his brother’s life, Mickey has to pretend to be a doctor. The act was easy until he met his mate…

The Irish Dragon Doctor
She was mine. She was forbidden.
And my mission was an ugly secret.
I had to protect my brother from a wolf shifter.
As an Irish dragon shifter in the mafia, danger was my second name.
That’s why I couldn’t get close to Rebecca.
She was too innocent… and she was my intern.
Keeping my hands and eyes to myself was hard.
Very hard.
And keeping her safe?
That was going to be an impossible task.

The Gorgeous Intern
A mysterious doctor.
A heartless player.
And sexy as sin.
Weren’t doctors supposed to be boring?
There was something about Mickey that I couldn’t put my finger on.
I was mesmerized so I let him claim my innocence.
But he was my doctor boss.
A man that I was supposed to admire from afar.
But If only I knew what he was really hiding in his heart.
And if only he’d revealed who he really was.