On Every Thug I Love: An Urban Romance Box Set: Collection 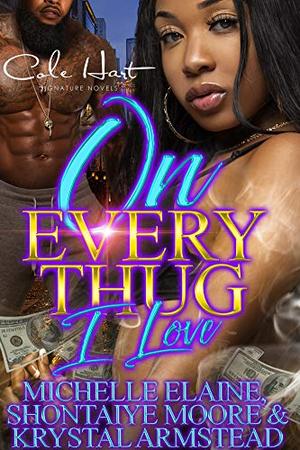 On Every Thug I Love: The Atlanta Edition

There was always something about a guy from the hood that Melinda could never resist. After falling for her best friend, Jabari, she thinks she’s found “the one”. That’s until circumstances and a lengthy prison sentence sends them on separate paths following the birth of their son. After their split, she jumps from one dead-end relationship to another; until she finally considers Dominic—a man that’s different from everything she ever wanted.

When her past collides with her present, her whole world is shaken up—literally. Will the stars align to reunite her family? Or will Jabari’s inability to separate himself from his past drive them apart for good?

On Every Thug I Love: The Baltimore Edition

Some women risk it all on the men they love. Sometimes, it’s worth it, while most times it isn’t. This rings true for Italy, India, and Kayla, who although, live vastly different lives, are connected in more ways than one.

Twenty-five year old, Italy Cannon is the girlfriend of rising Baltimore rapper Rayquan Jones. Enjoying and loving the comfortable life he’s building for the two of them, Italy can’t imagine herself without him. That is until she’s actually staring into the face of the unimaginable. Quan’s rapid rise and success don’t sit well with some in his city. Unfortunately, his carelessness might end up costing him more than what he is willing to pay. In the blink of an eye, Italy’s world is turned upside down.

India Cannon is the older sister of Italy Cannon. Fiercely devoted to her sibling, India’s loyalty is put to the test when an unexpected tragedy strikes. She soon finds herself forced to make choices that challenge her morality and her friendship with her best friend Kayla; who, although, is being abused by the man in her life, feels a sense of obligation to protect. As the lives and relationships of these women intertwine, how will they land in the end? Facedown? Or still standing?

On Every Thug I Love: The North Carolina Edition

When you’re feeling lost in the night, and when you feel your world just ain’t right, you’re supposed to be able to call on your friends. But that isn’t always this case. The saddest thing about betrayal is that it rarely comes from your enemies.

Merci is a police officer who finds herself always covering for her friends. She finds herself in love with Hendrix, a man who wants to sleep with her but won’t commit to her. Why? Because he’s engaged to her foster sister, Paris.

Paris, on a daily basis, battles the demons of her past. The only one who she could confide in was her fiancé’s best friend, Kace—who had a hidden agenda of his own.

With friends like these, there was no need for enemies. Just when you think you can trust someone who you knew your entire life, they show you, you can’t. Sometimes the person you’d take a bullet for is the same person with their hand over the trigger.

This is one of the best books out for 2020. Three never read before standalones that you will not regret that you selected.
more
Amazon Other stores
Bookmark Rate Book

Similar books to 'On Every Thug I Love: An Urban Romance Box Set: Collection'

More books like 'On Every Thug I Love: An Urban Romance Box Set: Collection'   ❯

Buy 'On Every Thug I Love: An Urban Romance Box Set: Collection' from the following stores: