The Children of the Gods Series Books 14-16: Dark Angel Trilogy 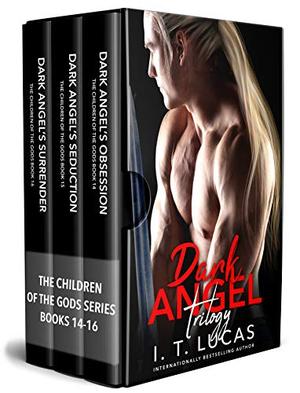 "By far, this is THE. BEST. VAMPIRE. SERIES. EVER. The enigmatic Brundar's story is finally told. Wounded and betrayed at a young age, he has walled himself off from all feeling and entanglements. It is only when he meets the equally wounded Callie that he finds these walls lowering, whether he wants them to or not. And like the mythological Calypso, she calls to him the way no other woman ever has. Will he allow himself the happiness he has always richly deserved, or will he continue his isolated life and wind up breaking two hearts?"

Dark Angel's Obsession
The cold and stoic warrior is an enigma even to those closest to him. His secrets are about to unravel…

Dark Angel's Seduction
Brundar is fighting a losing battle. Calypso is slowly chipping away his icy armor from the outside, while his need for her is melting it from the inside.
He can't allow it to happen. Calypso is a human with none of the Dormant indicators. There is no way he can keep her for more than a few weeks.

An Amazon top 10 All-Star, I. T. Lucas is one of the most popular authors in Kindle Unlimited.
more
Amazon Other stores
Bookmark Rate Book

Similar books to 'The Children of the Gods Series Books 14-16: Dark Angel Trilogy'

Recent books by I. T. Lucas

Buy 'The Children of the Gods Series Books 14-16: Dark Angel Trilogy' from the following stores: