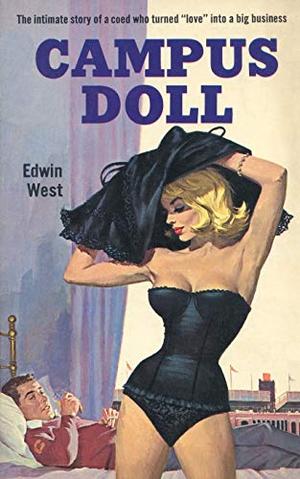 The intimate story of a coed who turned "love" into a big business!
At Clifton College the male students were never frustrated. When a campus cutie teased and ran, there was always Jackie Hayes' "study rooms" to resort to.
There you could do your "homework" in peace. There you could carry on experiments so dear to the hearts of all eager students, with tutors truly dedicated to their work: Sandy, Laura, Rita, Honey and even Jackie—the campus doll herself.
True, this extra-curricular work led to no degree but it did satisfy a need, with girls on your own mental level—coeds who knew as much about English Lit, Advanced Psychology—and Love—as you did.
But with all the fun comes a dark side. Jackie thought it would all be so simple. Turn a trick a few times a week and she would have enough money to stay in college. But it kept escalating. Now she was a Madame of the house and behind her back even Marijuana was being sold! She didn’t realize she’d need protection, even if that protection was unwanted and cruel. Men were the problem, Jackie was convinced, and that’s when she turned to the arms of innocent Rita.

First published in 1961 by Donald E. Westlake under the pen name, Edwin West.

"It's always interesting to read something by a favorite writer from the period when he was starting out. Campus Doll isn't going to win any literary prizes, and it's not going to do a thing to increase Westlake's reputation. It was probably written very quickly. Maybe over the weekend. But it's slick and short and fun to read as a literary and cultural artifact. It has a nice cover, too."- Bill Crider's Pop Culture Magazine
more
Amazon Other stores
Bookmark Rate Book