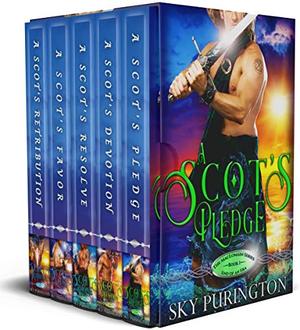 Modern-day women. Fierce, Viking warriors. Unimaginable connections through time. Sail the high seas and weather ninth-century Scandinavia in a best-selling romance series unlike any other. Endless adventures. Unexpected twists. Mind-blowing passion. Find it all in The MacLomain Series: Viking Ancestors.

VIKING KING- Determined to take a break from her past, Megan cozies down in her million dollar Winter Harbor Maine home and focuses less on money and more on dreams. With a love for Viking shipwright skills, she constructs a small scale longship. What she doesn't anticipate is an unexpected call from the past. Of dragon blood, Viking King, Naðr Véurr Sigdir 'the bold' knew that the bargain he struck with the seers would likely lead to an unpredictable outcome. What he didn't foresee is a headstrong woman from the future washing up on his shores.

VIKING CLAIM- Veronica tries to cope with losing her sister but is drawn to everything that seemingly took Megan away. A magical stone. Rune staves. A Viking king. The far distant past. It all seems too impossible to believe. Until she slides down a snow swept hill near Maine's, Raven's Nest cliffs straight into a reality she never could have imagined. Of dragon blood and brother to the king, Raknar Sigdir 'the hunter' is determined to welcome any woman from the future if it means he can conquer anew for his people. However, Veronica, the irresistible woman thrust back in time, soon has his mind less on loot and more on all the things he forgot about himself. A pact with the seers hangs in the balance when a ninth century Viking gives in to his heart to protect a modern day woman from a sworn, powerful enemy...his former wife.

VIKING HEART- Amber is heartbroken. Supposedly because of a pact made between three ninth century Viking brothers and Mt. Galdhøpiggen's seers, her sisters have vanished into the distant past. Struggling with grief, she leans on her part-time fling Sean until even he is torn away. Or so it seems. Of dragon blood and brother to the King, Kol Sigdir 'the lucky' has been determined to avoid his fate since the moment he promised himself, sight unseen, to a woman from the future. He adores all women and it's no easy thing knowing he has to eventually pledge his heart to just one...until he meets Amber. As they grow closer, they face multiple threats. King Alrek declares war and he has an ally nobody could have anticipated. Hearts struggle, rip apart and then are rebuilt when the laws of time are tossed aside.

Similar books to 'The MacLomain Series: End of an Era : A Time Travel Romance Boxed Set'

All books by Sky Purington  ❯

Buy 'The MacLomain Series: End of an Era : A Time Travel Romance Boxed Set' from the following stores: