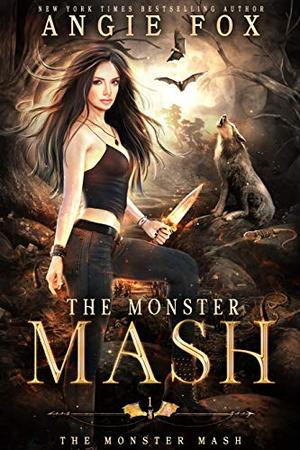 Ancient gods. Modern war. And a star-crossed couple who could use some divine intervention.

The day I was drafted into the army of the gods, all I knew about being a MASH surgeon was what I’d learned from Hawkeye Pierce and Hot Lips Houlihan. Now here I am, Dr. Petra Robichaud, in the middle of an immortal war, assigned to a MASH camp with a nosy sphinx, a vegetarian werewolf, and an uptight vampire who really needs to get a life.

At least they’re all too busy with their own dramas to discover my secret: I can see the dead. It’s a forbidden gift, one that can get me killed, so I haven’t told a soul.

Until the arrestingly intense Galen arrives on my operating table, half-dead and totally to-die-for. When his spirit tries to slip out of his fatally wounded body, I impulsively slip it back in. Call it a rash resurrection. One I’ll live to regret.

Now Commander Galen of Delphi knows my secret, and he’s convinced I’m part of an ancient prophecy—one that can end the war for good. But taking a chance could cost me everything. And it would be easier to convince him to leave me alone, except now the prophecies are starting to come true…

What Reviewers are saying…

5 Stars! “Yet another Angie Fox book that is impossible to put down.”

5 Stars! “This was a cross between MASH and a grown up, sexy version of a Percy Jackson novel—lots of fun and a highly recommended read!”

5 Stars! “Can I give it 10 stars? This reminded me of the MASH TV shows that I watched growing up, only better.”

5 Stars! “Read this one fast only if you can afford the rest of the series, because you ARE going to want to read on.”

5 Stars! “Angie's humor is perfectly on par with MaryJanice Davidson's Undead Series, so if you have enjoyed those then you will love this.”

*The core of this book was originally called Immortally Yours, published by St. Martin's Press in 2012. The author has rewritten it into the way she always envisioned the story to be, which means it is now a romantic comedy instead of an angsty book. Oh, and there are a lot more pet swamp lizards, too.

The 'The Monster MASH Trilogy' series

Buy 'The Monster MASH: A dead funny romantic comedy' from the following stores: