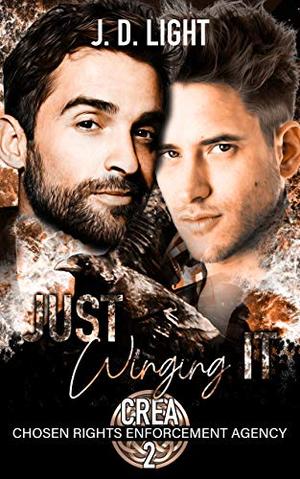 Presley's late teen were filled with one horror after another. Kidnapped, forced to mate two shifters he didn't want and nearly a third, impregnated and abused in almost every way, he's definitely been through it, but three years out of being rescued by the CREA, he has worked hard for the life that he has, but he has a home, a beautiful son, a job and friends to show for it… and he has Fields, even if he's too damaged to ever even think about having a relationship with the gorgeous raven shifter who drives him absolutely up the wall while also making him crave a life he can never have. When Fields offers to mate him to keep him protected from whoever is trying to track him through his chosen mark, Presley adamantly refuses. Nobody should be saddled with his baggage, especially not someone so full of life like Fields, even if it is one of Presley's secret wishes.

Just Winging It is book 2 in the my new MPreg possible series. It is a spin off of the Chosen series, and involves a whole new generation, but will of course have cameos from some of your favorite Chosen characters as well as some Terra Mortis characters. I consider these books MPreg light. Meaning, though pregnancy is possible, that does not mean it will be in every book. Each book contains a new couple with a guaranteed HEA, but if you want to know what is going on with the background plot, it is suggested that you read them in order!
more
Amazon Other stores
Bookmark Rate Book

Buy 'Just Winging It: A Frienemies to Lovers, Shifter, MPreg-Possible Love Story' from the following stores: