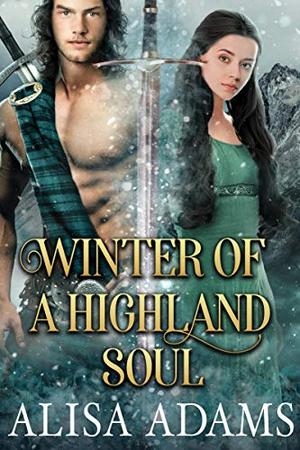 To survive, she has to revive a heart that was lost in the bottom of a loch many years ago…

Fillan is the new Laird of the MacMoir clan, but neither the people nor the elders seem to trust him after their previous Laird's failure. His only chance of survival lies in marrying a Douglas girl and securing an alliance with the powerful Douglas clan. For his good luck, Cairis Douglas is at the perfect age to wed and an ideal match if only there was not one major problem; she has decided not to marry.After witnessing the horrible marriage of her sister in law, Cairis knows that a union between a man and a woman can end in disaster. The young lass gets even angrier when she learns that her father wants her to marry a MacMoir; in other words, an enemy. But her strong sense of duty, pushes her to set aside her happiness for her people's good and she only wishes that her new husband is not a brute. To her surprise, Fillan promises not to marry her, for neither of them ever had that desire! He only asks her to act as if they were betrothed to throw off the elders' suspicions and gain his clan's trust. But after an attack by the elders’ men on their way to the MacMoir's keep, they are left running for their lives!The two must now work together and find a way to expose the elders’ betrayal before it is too late. To make things worse, Fillan has not dealt with the demons of his past and seems to have an irrational fear for large bodies of water, making their journey even longer as they pass around lochs instead of crossing them.While they journey, Fillan will be unable to deny his attraction to the strong-willed lass, yet, the two travelers will have to face new difficulties when a terrible snowstorm hits them. But can the freezing temperatures and snow put out the fire ignited in their hearts?"Winter of a Highland Soul" is a standalone story by best-selling author Alisa Adams, packed with passion, romance, and redemption, set on the beautiful backdrop of the Scottish Highlands. Get your copy TODAY for 99c OR FREE With Kindle Unlimited! Enjoy!
more
Amazon Other stores
Bookmark Rate Book

The 'Highlands' Elements of Fate' series

Similar books to 'Winter of a Highland Soul: A Scottish Medieval Historical Romance'

Buy 'Winter of a Highland Soul: A Scottish Medieval Historical Romance' from the following stores: