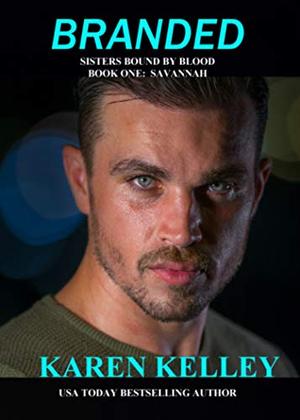 Her father told everyone that her older sister ran away. Savannah knew better. She was there the day the man came to get Jade. The day he paid her father. That’s how she knew what was about to happen to her.

Savannah tried to run back home. Her little sister needed her. Marco’s men found her and brought her back. That night Marco branded her with his initials so she wouldn’t forget who owned her. She didn’t think her life could get any worse, but she was wrong.

Breaker only stopped at the roadside diner for a bite to eat. He was tired, and just coming off a government assignment, and maybe a little less cautious. While he ate, the woman slipped into his car and hid in the backseat.

What he knew for certain: she was scared, she was beautiful, and she was a liar. He didn’t believe a word she told him about trying to get to New Orleans because her mother had been in a bad car wreck. But when two thugs catch up with them to return Savannah to their drug cartel boss, and attempt to kill him, he quickly ends the threat.

Now he’s helping another stray, except this time it’s different. Breaker wants to wipe away the pain he sees lurking deep in her eyes. He wants to heal her wounds.

But when the only way he can save her from the obsessed Marco is to take her deep into the Louisiana swamps where he grew up, can he face his own dark past?

Three books, three sisters who will never forget the importance of the blood that runs through each of their veins, and the strong connection between them.
more
Amazon Other stores
Bookmark  Rate:

'Branded: Savannah: Sisters Bound By Blood' is tagged as:

The 'Sisters: Bound by Blood' series