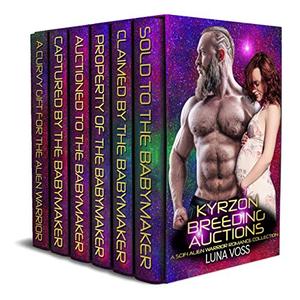 Six human brides find their warrior mates in this hit sci-fi romance series! Now available to binge-read all in one place.

Every single Kyrzon in the auction house gasps. It's obvious that this is a much, much higher price than any of them would usually consider paying for a mate. All of them are looking at the handsome, bearded warrior, waiting to see what he’ll do next.

On the Planet Kyrzon, powerful alien warlords compete for the right to breed with a human female. Each story follows a different human bride as she is purchased at auction by a fearsome warrior and claimed as his mate. There's action, adventure, twists and turns, and more than a little steam as these plucky young women go from shivering on the auction block to owned, cherished, and pregnant by their muscular, doting Kyrzon mates. No cheating, and happy ending guaranteed!

Sold to the Babymaker

Claimed by the Babymaker

Property of the Babymaker

Auctioned to the Babymaker

Captured by the Babymaker

A Curvy Gift for the Alien Warrior

All books by Luna Voss  ❯