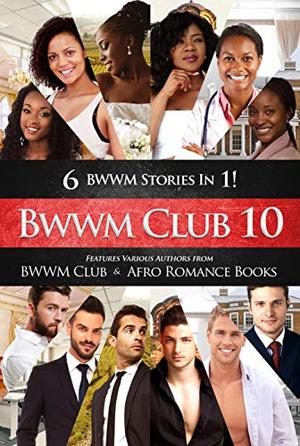 The tenth part in the Swirl Love series.

In this book you get 6 classic BWWM stories in 1!

With bad boy bachelors, brooding billionaires, and shocking marriages of convenience, you’re sure to gasp out loud while reading these thrilling yet sexy romances by various BWWM Club authors!

Suitable for over 18s only due to shockingly hot sex scenes!

A Marriage of Convenience – Ellie Etienne

Donna has created a name for herself running the super popular fashion blog, Own Your Fashion!

Yet she’s constantly turning down proposal after proposal from people who want to buy her business.

That was until hunky CEO Jason walks into her life with a proposal she can’t refuse: marriage!

When Donna discovers something that will change both of their lives, will it be what it takes to make their relationship more than just a marriage of convenience?

Alyssa Benjamin owns a small wine shop and is passionate about the industry.

So when she is invited to an event in Napa hosted by Italian billionaire Matteo Colombo she is thrilled!

Matteo’s father has an ultimatum: Matteo will lose his inheritance unless he has an heir by the time he’s thirty-five!

Yet when Matteo meets Alyssa, he knows he doesn’t need to wait that long and begins to pursue her.

But Alyssa doesn’t believe in love at first sight!

Can Mateo prove to Alyssa that they’re meant for each other?

Michelle has sworn to never fall in love again after her failed marriage.

Now she’s struggling with a custody battle while working hard to be a successful journalist!

Marry him and she’ll be able to get into the most prestigious newspaper company in New York!

At first, Michelle doesn’t think much about David…

Despite his good looks and charm, he is a player through and through!

Yet to her surprise, her lukewarm feelings for David quickly turn into hot and boiling passion!

But just as Michelle opens her heart to love, David begins to drift away…

Is Michelle wasting her time thinking that love can result from an arranged romance?

Naomi Bennett is a busy doctor with no time for dating.

But soon Naomi can’t deny her feelings and falls head over heels in love with him!

But when Naomi is offered an opportunity to escape from her gossiping workplace, she must now choose between her career and Marc!

Will she make the right decision?

Or will she live to regret it?

Ginger Lanton has been a widow for ten years.

When she moves to another state to finally start her life over, she never thought her second chance at love would be with a man whose company was responsible for her husband’s death!

One of which is dealing with the death of a woman’s husband—the very woman he has fallen head over heels for!

Makena Mary Otieno is an ER surgeon and a first-generation American.

She worked hard to get where she is and takes no nonsense from anyone—especially from a half-sedated wealthy playboy who has come under her care!

Philip is smitten with Makena right from the start, and it becomes a game to him to try to win over her heart!

But Makena is steadfast in her resistant to Philip’s charm, which makes him want her all the more!
more
Amazon Other stores
Bookmark Rate Book

All books by BWWM Club  ❯