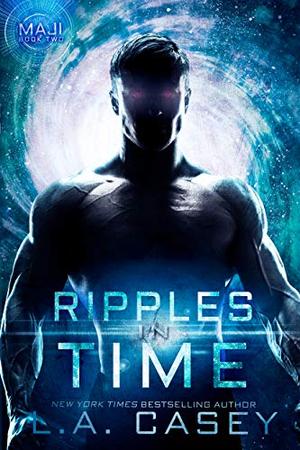 Escaping Earth for twenty-one-year-old Levi meant fleeing a monster who caged her and abandoning a mother who loved her. Elation and misery were her constant companions. Bred a slave, Levi had only ever known hardship ... but on Ealra, home to the Maji species that saved her from a fate worse than death, she was free.

Existing from day to day for the past few decades had become the norm for Ezah. He didn’t know happiness, and he didn’t want to either. Ever since he’d failed to protect his intended mate from a vicious beast, he found himself drifting further into despair.
In the midst of their inner darkness, their lives intertwine and put them onto a path of light. Levi soon imagines a future filled with possibilities while Ezah prays history doesn’t repeat itself.

When a monster from his little human’s life emerges from her past, he vows not to make the same mistake twice.
more
Amazon Other stores
Bookmark  Rate:

'Ripples in Time' is tagged as:

Similar books to 'Ripples in Time'

Buy 'Ripples in Time' from the following stores: