Schooling the Jock: An Enemies-to-Lovers, Campus Romance (Nerds vs Jocks) (Nerds Vs Jocks #1) 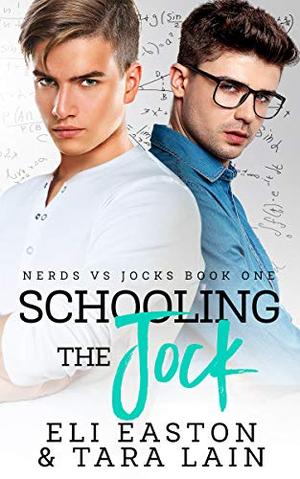 Only an unfair universe makes a guy who’s that gorgeous so damned obnoxious.

A-hoe!
Poindexter!
Snarky, superbrain Dobbs and snooty football star Jesse stare at each other from their rival frat houses on opposites sides of the street -- and opposite sides of everything else.

Alpha Lambda Alpha and Sigma Mu Tau have been sworn enemies for decades. Then one disastrous prank proves to be the final straw, and the college dean blows his cork!

Work together or lose both your houses.

Question - -How can Dobbs win his coveted Quiz Bowl championship when he’s forced to put a dumb jock on his team?
Answer -- Lots of personal schooling.

But when personal becomes very personal, Jesse risks causing his overtaxed family one more huge worry and the running back starts running.

Will Dobbs give up on the shocked jock, or show him that the answer to the big question is, Yes?

SCHOOLING THE JOCK is an enemies-to-lovers, opposites attract, campus romance – with one hell of a lightning round.
more
Amazon Other stores
Bookmark  Rate:

'Schooling the Jock: An Enemies-to-Lovers, Campus Romance (Nerds vs Jocks)' is tagged as:

The 'Nerds Vs Jocks' series

Similar books to 'Schooling the Jock: An Enemies-to-Lovers, Campus Romance (Nerds vs Jocks)'

Buy 'Schooling the Jock: An Enemies-to-Lovers, Campus Romance (Nerds vs Jocks)' from the following stores: