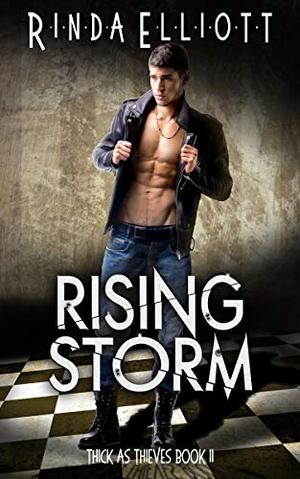 Finally free of the blackmailing monster who forced him into a life of crime, Helix is ready for a fresh start. A better life.

Unfortunately, making amends for past wrongs and locating his brother means stealing…again.

To make matters worse, he must work with ex-cop Gareth Jones. Not that the man is hard on the eyes, but he was in law enforcement and Helix doesn’t trust them.

Gareth has lost everything. But helping this band of reformed thieves promises to give him a new purpose in life.

If only he didn’t have to work with Helix. The man is hot as hell but a real pain in the ass. Still, his drive to find his lost brother has left Gareth wondering if he’d misjudged the man.

When this simple job goes wrong, Helix and Gareth are left clinging to each other, struggling to deal with new feelings neither thought possible. But are both men too damaged to take a chance on each other?

'Rising Storm: Thick as Thieves Book 2' is tagged as:

The 'Thick as Thieves' series