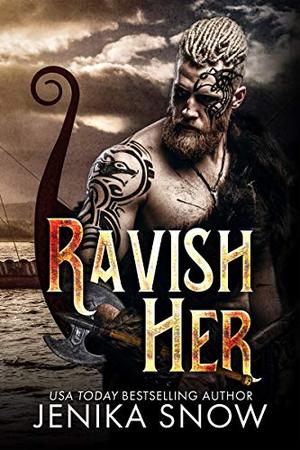 When Agata wakes up in the middle of nowhere after drinking an herb concoction given to her by an old Norwegian woman, she’s confused, afraid, and just wants to get home.

But she doesn’t get time to think about her situation, because a towering man resembling a battle-scarred Viking wielding an ax takes her as his property.

Although there’s a language barrier between her and the barbarian, she understands the one word he keeps calling her—wife.
When Stian Dagmar finds a woman alone and unconscious in the woods, the first thought he has is that she’ll be his wife. She’d fight him, struggle for her freedom, but being with him would be a lot safer than what his world would give her.

He just has to show her that he can be a good provider and protect her from the dangers that surround them.
Can Agata accept her new life and the feelings for Stian that grow within her, or will she go home the first opportunity that arises?

Reader note: This title was previously published as Ravish Her Completely. Although it has undergone a title change, cover update, and been re-edited, the story itself is the same. It may contain material sensitive to some readers.
more
Amazon Other stores
Bookmark  Rate:

'Ravish Her' is tagged as:

Similar books to 'Ravish Her'

Buy 'Ravish Her' from the following stores: