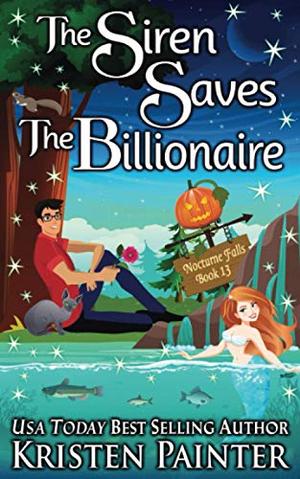 Welcome to Nocturne Falls, the town that celebrates Halloween 365 days a year.

The tourists think it's all a show: the vampires, the werewolves, the witches, the occasional gargoyle flying through the sky. But the supernaturals populating the town know better.

Living in Nocturne Falls means being yourself. Fangs, fur, and all.

Custom-aquarium specialist, Undrea Seeley, is supernaturally good at creating made-to-order fish tanks for her customers. Probably because she loves what she does. And because she’s a mermaid. She also loves living in a town where she can be herself. Well, the version of herself everyone thinks she is. But then, who isn’t harboring a secret, right?

Tech billionaire Ethan Edmonds is an open book. Hard not to be when the media follows your every move, something they’ve done pretty much since he made his first million at seventeen by selling an app he’d created. Now he’s sold his biggest company for an even greater profit and he’s ready to disappear a little. At least enough to focus on a project that has nothing to do with money and everything to do with helping people.

But when his self-appointed fiancée decides he needs a majestic centerpiece aquarium in their new home, she has no idea things are about to spring a leak. Ethan has never met a woman like Undrea and is instantly captivated by her free spirit and fun-loving ways.

Undrea understands his attraction to her, however. It’s driven by magic she can’t control, but she’s still determined not to harpoon his relationship, despite her growing feelings for him. Then she realizes there’s something fishy going on and it seems Undrea’s not the only one hiding her true identity.

Saving Ethan from the dark forces out to get him could mean revealing the truth she’s been trying to hide. But will that secret sink them both or will she sacrifice herself to protect the man she fallen in love with?
more
Bookmark Rate Book
Amazon Other stores

Similar books to 'The Siren Saves The Billionaire'

More books like 'The Siren Saves The Billionaire'   ❯

Buy 'The Siren Saves The Billionaire' from the following stores: