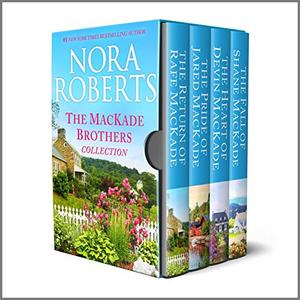 The Return of Rafe MacKade

Ten years after disappearing from Antietam, Maryland, the bad boy has come home. Cleaned up, successful and still dangerously good-looking, Rafe MacKade plans to open a bed-and-breakfast with the help of antique shop owner Regan Bishop. Though independent Regan claims to not want to get involved with a rebel, working in such close quarters has her struggling to resist Rafe’s charms. And even though she wants to keep their relationship professional, Rafe is pretty sure that her reaction to their sizzling kisses suggests otherwise…

The Pride of Jared MacKade

Jared MacKade always fights for what’s right. As a kid he was competitive, and that spirit has continued in his career as an attorney. So when a challenge arrives in the form of stubborn single mother Savannah Morningstar, Jared won’t be deterred by her cool and defensive attitude—quite the opposite. Jared is drawn in by the strong woman, and though Savannah is prepared to keep her guard up, Jared knows what he wants. Not only is he interested in Savannah, he’s grown to love her son too. The former bad boy has always longed for a family of his own, and now that he’s found the one woman he wants to come home to, Jared is ready to shed his pride and take a chance on love.

The Heart of Devin MacKade

Since he was a young man, Devin MacKade has always known his destiny was to become sheriff of his small town, to serve and protect Antietam, Maryland. For a long while he thought his future would also include Cassie Connor—the woman he’s known, and certainly loved, forever. But when Cassie married the wrong man, Devin did the honorable thing and kept his feelings to himself. Twelve years later, Cassie’s divorced and Devin can finally follow his heart. The question is, can Cassie?

The Fall of Shane MacKade

Shane MacKade is used to getting what he wants, especially when it comes to women. So he’s surprised when the brilliant Dr. Rebecca Knight consistently brushes off his advances. The PhD-toting academic is in town to conduct a research experiment at the MacKades’ ancestral farm, and Shane can’t help but be impressed by Rebecca’s wit and intelligence. Though Rebecca insists she’s too busy to make any time for romance, Shane can see that the MacKade charm is slowly winning her over. Could this mean Antietam’s notorious bachelor has finally met the one?
more
Amazon Other stores
Bookmark  Rate:

'The MacKade Brothers Collection' is tagged as:

All books by Nora Roberts  ❯

Buy 'The MacKade Brothers Collection' from the following stores: