A Haunting Midlife (Witching After Forty #3) 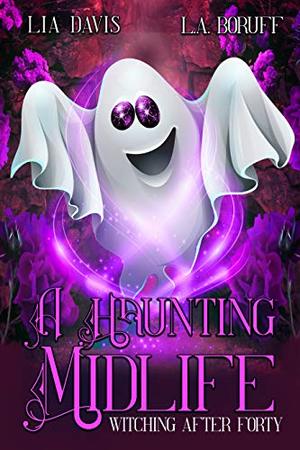 Ava Harper may be a raiser of the dead and a not-so-famous author, but she isn’t vampire hunter. Not even close.

With the decision made to stay in Shipton Harbor, she returns to the home she shared with her deceased husband in Pennsylvania to put it on the market. But saying goodbye to the memories of the home they raised their son in is a lot harder than it had sounded in her head.

In the months she’s been in Shipton, new neighbors moved in across the street from her Philly home. Now, Ava has nothing against vampires. But when people in the neighborhood start turning up dead, she can’t help but to check into the newbies in the hood.

Since she doesn’t know enough about law enforcement red tape, she calls her best friend to come and help. However, Sam is working a case with a neighboring town and Sheriff Drew takes it upon himself to show up at her door instead.

And now, as if dealing with how the sheriff makes her knees weak isn’t bad enough, her house is haunted.

Just another day in Ava’s life at this point.
more
Amazon Other stores
Bookmark Rate Book

The 'Witching After Forty' series

Similar books to 'A Haunting Midlife'

All books by Lia Davis  ❯

Buy 'A Haunting Midlife' from the following stores: