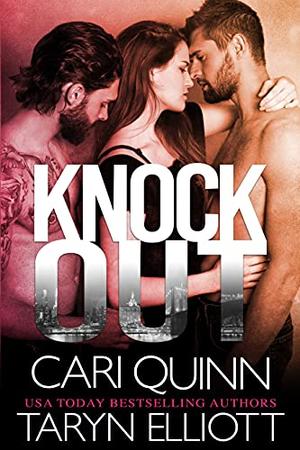 She’s forbidden to me…and so is he. Too bad I want them both.

MMA fighters are supposed to leave it all in the ring. But I have a secret. Two secrets, actually.

Secret #1: I can’t deny the simmering attraction I feel toward Lily, the sweetly innocent daughter of an overprotective cop who is like a second father to me. And Lily’s friend JC? Freaking A, he's hot. He also just happens to be renovating the gym I train at and is always walking around shirtless and sweaty.

Secret #2: I love women. I love men just as much. Once I get an unforgettable taste of both Lily and JC, I'm addicted. One night turns into more, and soon I'm ready to walk away from everything just so I don't have to give up either of them.

Now with all of my secrets coming to a head, the only question left is how much I'm willing to lose.

Author’s note: Lots of boy-on-boy—and boy-on-girl—touching ahead. Knockout is book 4 in the Tapped Out MMA series and is a short novel with a happily ever after ending and no cliffhanger. Previously released by Cari Quinn in the Hunks, Hammers and HEAs anthology in 2015.
more
Amazon Other stores
Bookmark Rate Book

The 'Tapped Out' series