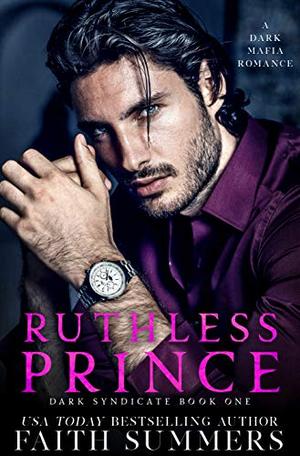 We were destined for disaster from the second we met …

Massimo D’Agostino is the heir to his father’s empire.
Don’t be fooled by his handsome face, or that piercing blue gaze.
He’s no prince charming.
He’s dangerous and feared, possessive and fierce.

Our first meeting began with a contract that forced me to marry him and sign my life away.
I was a debt repayment and a pawn in his game to exact revenge against my father.
The only way out is death.

I belong to him now.
Me, the Balesteri Mafia Princess.
Pure and untouched…
Owned by the devil who placed me in a gilded cage.

But something unexpected happened the moment our paths collided.
It made me want more of what he had to offer every time I lay beneath him.

Then the past came knocking at the door and dark secrets scattered at my feet.
Suddenly I don’t know truth from lies.
Or, who the monster in this story is.
I thought it was my husband.
Now I’m not so sure…


“Ruthless Prince” is the first book in the Dark Syndicate series. It is a stand-alone Dark Mafia Enemies to Lovers Arranged Marriage Romance, complete with HEA and no cliffhangers.

Please note: this book is a dark mafia romance that contains mature content, graphic violence and may contain triggers. If such materials offend you, please do not read.
more
Amazon Other stores
Bookmark Rate Book

All books by Faith Summers  ❯