Prophesy: Book III: His Righteousness (The King and Alpha Series #3) 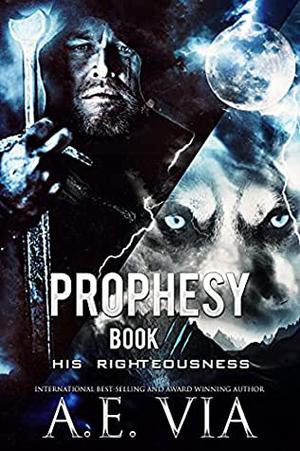 Chaos is inevitable when fate pairs the executioner of evil with a man of righteousness.

In all the years that Adres Cavalerie has inhabited the earth, he never thought he would discover his connection to the Prophesy within the Volkov Alphas stronghold.

As the oldest living vampire, Adres was also the strongest immortal of his time with abilities that surpassed comprehension. He was a warrior and guardian, a champion for the downtrodden and forgotten. His name was legendary, the brutal ways he killed, notorious. But there was a secret to his madness that no one of this world understood.

Until his evil soul comes into contact with Macauley Volkov’s righteous wolf.

“You may be a master at hiding your scent.” The alpha dipped his head low and pressed his nose to Adres’s temple, breaking through one of his impentrable shields, “but, I smell the real you… vampire.”

Adres has come to the White Mountain alphas to fulfill a duty and leave, but after one scent of the virtuous wolf he knew he wasn’t going anywhere. The Prophesy led him to Macauley and his light… Adres can’t turn away from the only hope of freeing his cursed heart.
He had to find out who else he was, and why fate has chosen someone as damaged as him to end the Prophesy?

This story DOES NOT contain or even mention MPREG. No cliffhangers. Ends with a very HEA.
Warning: Violence.
more
Amazon Other stores
Bookmark Rate Book

The 'The King and Alpha Series' series

Buy 'Prophesy: Book III: His Righteousness' from the following stores: