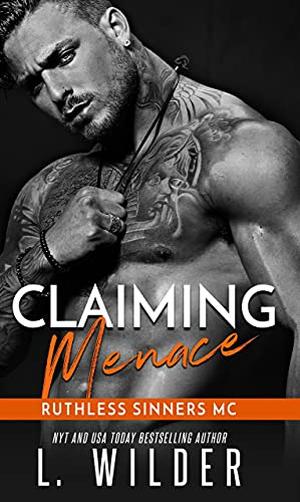 Wall Street Journal and USA Today Best Seller L. Wilder brings you a new addition to the Ruthless Sinners series. Menace will show readers just how hard it is to resist a bad boy with a good heart. On sale for .99 cents only during preorder.


The second I laid eyes on Aubrey Cash, I knew she was hiding something.
The blond haired, blue eyed beauty clearly wasn’t who she said she was.
I couldn’t force myself to turn her away...
So I hired her.

As the club’s hacker, it was my job to uncover secrets—secrets like hers.
It was the only way I could make sure my brothers were safe.
But with each day that passed, I became more and more distracted by my need to have her.

I wanted to claim her as mine.
She claimed me instead


Claiming Menace will have you rooting for forgiveness, mended hearts, and second chances.
This fifth installment of the Ruthless Sinners MC is a standalone MC romance with a group of bikers who will take you on a hell of a ride. These sexy bikers are foul-mouthed, possessive alphas who will do whatever it takes to protect the women they love. No cliffhanger and no cheating. Enjoy the ride!
more
Amazon Other stores
Bookmark Rate Book