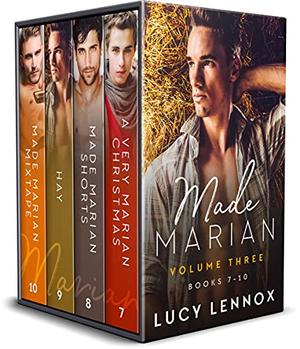 Enjoy the Made Marian series in bundle format. Included in Made Marian Volume Three are the following four titles totalling around 200,000 words of Made Marian stories:

The Marians are up to no good this holiday season as they focus their nosy matchmaking skills on the new kid in town. Noah has arrived in California from a tiny town in northern Canada with a small-town naivete that's downright adorable. Thankfully, his older brother's best friend, Luke, has offered him a place to stay and a cleverly-worded want ad has helped him find a temporary job while he awaits his American nursing license. When Noah realized this job involves selling... ah, toys... to strangers, he gets flustered and accidentally agrees to a holiday matchmaking scheme. Only, his roommate Luke can't handle all of Noah's sudden holiday plans when he was hoping to make a match with the sweetheart instead.

Come along and see how four of your favorite Marian side characters find their own Happy Ever Afters!

Brad: Whatever happened to the young redhead who showed up at Simone's wedding weekend to make Blue jealous? Well, he took off on a road trip to Vegas with a car full of naughty old ladies. When Tilly, Granny, and Irene get into a little... ah... legal trouble, the cop who escorts them back to the hotel enters the wrong room...

Beck: Jude's drummer has had a certain fantasy brewing in his mind forever. So when one night at an exclusive club leads him to believe he might finally be able to pursue it, he takes a chance and winds up dancing with someone completely unexpected.

Josh: After watching Jamie Marian fall in love and leave Alaska, Josh realizes the veterinarian wasn't exactly his dream man after all. No, that role has been filled for years by an old flame named Cyrus, the one who got away when he left all those years ago to move to Greece. When Cyrus turns up after all this time, will Josh welcome him back with open arms?

When Hayworth lands the interview of his dreams with elusive NFL coach, Christian Lasley, he can't wait to ask the man tough questions about his record-setting player and coach careers. But when he arrives, the white-hot chemistry he has with the coach is a complication he wasn't expecting. Coach Lasley surprises Hay with the scoop of his life, but will Hay take the story and run with it, or will he choose a different path to happiness altogether?

With thirteen additional short stories, including a 16-chapter novella about a new Marian sibling, Made Marian Mixtape gives us new insight into the Marian siblings' marriages and parenthood, Aunt Tilly's backstory, Jamie and Teddy's world travel, and an unexpected birthday present for Dante. Included in this mix is a 30k-word hurt-comfort novella about a character introduced in Delivering Dante. There's plenty of heat, heart, and humor in this collection.

The 'The Made Marian Collection' series

Similar books to 'Made Marian Volume One: Books 1-3'

All books by Lucy Lennox  ❯

Buy 'Made Marian Volume One: Books 1-3' from the following stores: