Shadow of a Chance (Shadow SEALs #5) 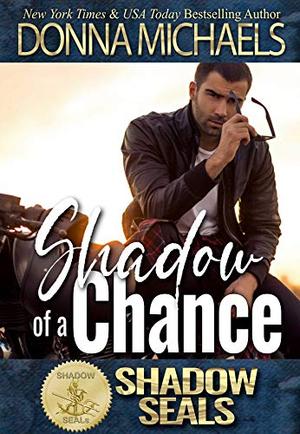 Hand chosen to work a joint op with the CIA as a Navy deserter, Navy SEAL Chance Reynolds followed the rules, and got burned. Now his best friend is dead, and Chance is stuck with the ‘deserter’ label. The only reason he isn’t rotting in prison is due to the interference from a former retired commander.

He owes the man.

So when a mysterious woman contacts Chance and offers him a job to safely escort the daughter of a murdered scientist to several classified locations across the country, he agrees. Not because of the insane amount of money offered, but to repay the debt to his former commander. Knight, no doubt, had to be the one who tossed his name to the shadowy lady. No way would anyone trust a Navy deserter to protect an asset.

Dana Spencer is no asset.

She’s not the scientist’s daughter either, but she is under orders to keep it a secret and carryout the mission her dear friend and coworker would have…if she weren’t in a coma. Even though Dana hates lying, especially to her handsome, ex-military bodyguard, she has no choice. The fate of millions depends on her deciphering codes left by her friend’s murdered father before his secret NSA work falls into enemy hands.

Dana is unlike any woman Chance has ever known, smart, beautiful, a crack shot, and even though he senses she’s hiding something, he doesn’t bother to fight their crazy chemistry.

Chance deserves to know the truth. He’s kept her safe and amazingly satisfied but will he desert her when he discovers she’s CIA? Between her deceit and an enemy who always seems to be a step ahead, Dana’s not sure if their mission or relationship stands a shadow of a chance.
more
Amazon Other stores
Bookmark Rate Book

Similar books to 'Shadow of a Chance'

Buy 'Shadow of a Chance' from the following stores: