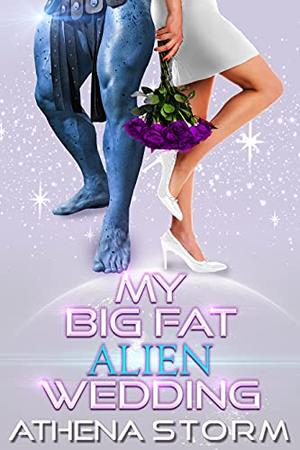 My boss is out of this world…literally.

Sure, Droz is almost seven feet of twisted steel and muscle. Sure, he’s richer than god. But I’ve got a strict ‘no dating the boss’ rule.

And then I discover he’s an alien.

But now it turns out that Droz needs my help. INS thinks he’s an alien too—but they think he’s an illegal kind and not the outer space kind. So Droz is about to be deported to Canada unless…

Unless I agree to marry him. Just for show, of course. Right?

The thing is, our sham engagement is starting to feel all too real. I think I’m falling for the giant, scaly alien masquerading as a human CEO.

Add to that he’s telling me I’m his fated mate.

It’s enough to make this single human girl’s head spin. All I know is every part of me wants to be his woman. So maybe instead of talking about our fake wedding, we should be talking about…

What color to decorate the nursery.

Author's Note: This is a completely standalone novel set in the Athenaverse. Even if you've never come into the Athenaverse, you'll be able to enjoy this science fiction romantic comedy that has no cliffhangers or cheating and guaranteed happily ever after!
more
Amazon Other stores
Bookmark Rate Book

Buy 'My Big Fat Alien Wedding: A SciFi Romance' from the following stores: