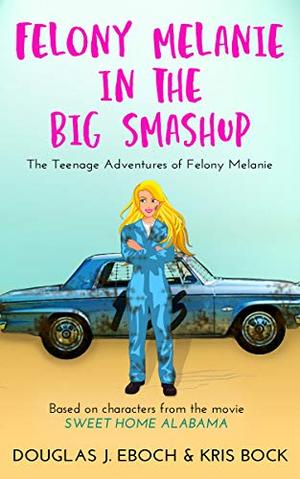 Summer is almost over, so it's time to have some fun! Jake and his buddies are fixing up old cars so they can destroy them in the Pigeon Creek demolition derby. After all, what's more fun than smashing into things?

Girls don't do demolition derby. Everyone says so. But Melanie is tired of sitting on the sidelines. Why should the guys have all the fun? She can smash up a car as well as anyone!

The guys don't want a girl intruding on their turf, and it’s not so easy for a broke teenager like Melanie to find and fix up an old car. She recruits some helpers and unearths an old, junked car, but everyone from Jake to the sheriff wants to keep her off the track.

Is the town ready for a female demolition derby driver? Is anybody ever ready for Felony Melanie?

Before Melanie Smooter became hot fashion designer Melanie Carmichael, she was known as Felony Melanie, the teenage troublemaker of Pigeon Creek, Alabama. Readers ages 12 and up will enjoy reconnecting with their favorite characters from the Sweet Home Alabama movie. Head back in time to the early 1990s for this laugh out loud rom com based on one of the best rom coms of all time.
more
Amazon Other stores
Bookmark Rate Book

The 'The Teenage Adventures of Felony Melanie' series

Similar books to 'Felony Melanie in the Big Smashup'

More books like 'Felony Melanie in the Big Smashup'   ❯

Buy 'Felony Melanie in the Big Smashup' from the following stores: