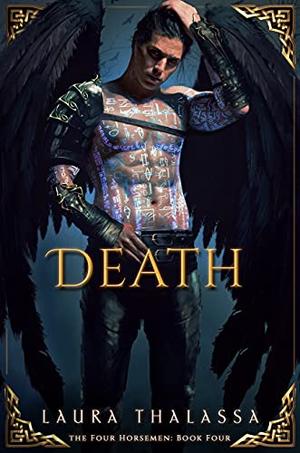 He’s known by many names: Thanatos. Horseman. God’s last angel. And then, of course, there's the one I’m all too familiar with—

The day Death comes to Lazarus Gaumond’s town and kills everyone in one fell swoop, the last thing he expects to see is a woman left alive and standing. But Lazarus has her own extraordinary gift: she cannot be killed—not by humans, not by the elements, not by Death himself.

She is the one soul Death doesn’t recognize. The one soul he cannot pry free from her flesh. Nor can he ignore the unsettling desire he has for her. Take her. He wants to, desperately. And the longer she tries to stop him from his killing spree, the stronger the desire becomes.

When Lazarus crosses paths with the three other horsemen, an unthinkable situation leads to a terrible deal: seduce Death, save the world. A hopeless task, made all the worse by the bad blood between her and Thanatos. But Death’s attraction to her is undeniable, and try though she might, Lazarus cannot stay away from that ancient, beautiful being and his dark embrace.

The end is here. Humankind is set to perish, and not even the horsemen can stop Death from fulfilling his final task.

Only Lazarus can.
more
Amazon Other stores
Bookmark Rate Book

The 'The Four Horsemen' series

All books by Laura Thalassa  ❯

Buy 'Death' from the following stores: