Enticed by the Satyr (Kindred Tales #38) 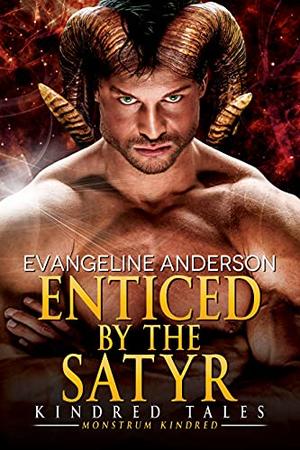 A warrior from another universe...
A woman running from an abusive relationship
A rip in the fabric of space-time and a malevolent alien race bent on destruction
How does it all tie together? Read Enticed by the Satyr...the first book of the Monstrum Kindred to find out

Mia could have had a beautiful life. She had a scholarship to Julliard and a future as a concert pianist ahead of her. But that was before her boyfriend got her pregnant on prom night and her strict parents forced her to get married. Now her life has been spent as the wife of an abusive husband who hates the music she still loves to play. But she dreams of a better future…and she also dreams of a stranger in the dark, one who will offer love and tenderness instead of hatred and scorn.

Storn is a Satyr—one of the Monstrum Kindred. Though he lives in a whole different universe, he begins to Dream Share with Mia. He longs to save her from her cruel husband, so when a rip opens in the fabric of space-time which leads from his universe into hers, he volunteers to go.

But there is trouble brewing…more rips are opening in the fabric of space-time and whole universes are being overrun by the Darklings—embodiments of pure evil that strip their victims to the bone and fill whole solar systems with their malice.

Can Storn save Mia from her abusive ex? And will the Monstrum Kindred come to Earth when the Darklings invade? More importantly, will they be allowed to call human brides when they themselves look so very different from regular Kindred?
You’ll have to read Enticed by the Satyr to find out…
more
Amazon Other stores
Bookmark Rate Book

Similar books to 'Enticed by the Satyr'

All books by Evangeline Anderson  ❯

Buy 'Enticed by the Satyr' from the following stores: