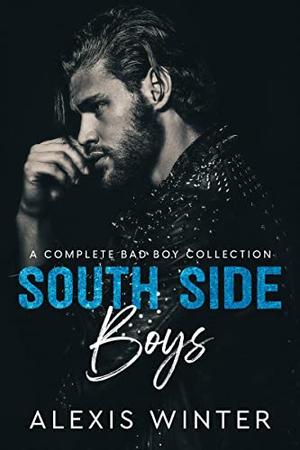 “This isn’t a fairytale sweetheart and I'm no knight in shining armor. This time, the big bad wolf just might eat you alive.”

Meet the South Side Boys. Damaged. Alpha. Protective.
So filthy you just might melt...

From best-selling author Alexis Winter comes a complete bad boy collection of four full-length novels. Each book will leave you satisfied with a steamy happily ever after sure to keep you reading long into the night.

Bad Boy Protector
I’m not a protector. I’m a damaged ex-con.
The last thing I need is an innocent little virgin, thinking I’m her happily ever after.

So I kept my distance,
Until that night.
Saving her felt like redemption from my past.
Falling for her was where I fucked up.

Now the shadows from my past have returned and I’ll stop at nothing to keep her safe.
Even if that means I have to lose her forever.

This isn’t a fairytale sweetheart and I’m no knight in shining armor.
This time the big bad wolf just might eat you alive.

She may need a fake boyfriend, but you better believe the way I'll have her screaming my name is real.
We agreed it was only pretend and I made damn sure she knew…I’m nobody’s happily ever after.

Look, this isn’t my dream life.
I never planned on being a single mom begging to live with my brother-in-law and it’s no secret he didn’t want this arrangement either.

Fresh off a broken engagement, he isn’t exactly welcoming us with open arms.
So how do I tell him the reason I ran away is because he’s about to be a daddy?

Bad Boy's Baby
How to NOT have a happily ever after...
#1. Get pregnant by your brand new boyfriend.
#2. Don’t tell said boyfriend you’re pregnant.
#3. Oh, and don’t tell him you’re the reason his brother is rotting in prison.

Getting pregnant by Ben is only the start to this drama, and now I’m neck-deep, hiding secrets of my own.
Someone lock me up and throw away the key, I’m about to serve a life sentence for screw up of the century.

Note from the author: This series was previously published in a boxset titled Say You’re Mine. Each book in this deliciously steamy set is a full-length novel with NO cheating or cliff-hangers and LOTS of heat, drama and angst.
more
Amazon Other stores
Bookmark Rate Book

Buy 'South Side Boys: A Complete Bad Boy Collection' from the following stores: