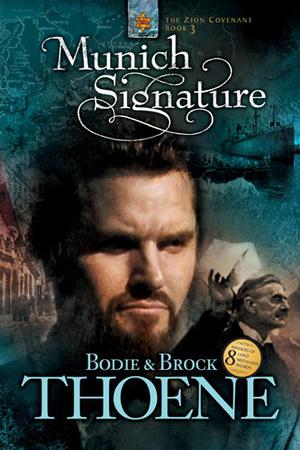 DISCOVER THE TRUTH THROUGH FICTION

Who will dare to take a stand?

In May 1938 Hitler’s forces continue to swallow pieces of Europe, forcing Jews to flee from his ever-tightening net. Yet where can they go? While nations argue politics and negotiate payments, and British prime minister Neville Chamberlain accepts Hitler’s signature of “peace in our time,” homeless Jews bob on the open sea in “coffin ships.”

After suffering through internment at Dachau and a hellish fire, Shimon Feldstein, former percussionist with the Vienna Philharmonic Orchestra, becomes a stowaway on the SS Darien, one of the battered refugee ships. His wife, Leah, a talented cellist, undertakes a treacherous journey over the Alps to save herself and a little boy. But it seems all the harbors of the world are slammed shut against the Darien. Where can they find a place to call home?
more
Bookmark Rate Book
Amazon Other stores

All books by Bodie Thoene  ❯