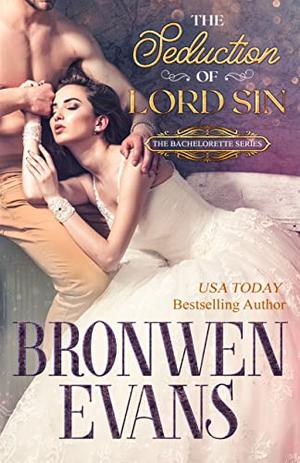 The Seduction of Lord Sin (The Bachelorette #2)

The lady’s intent is seduction. And he doesn’t mind being seduced. . . .

Widowed Charlotte Dexter, Lady Clayton, married for duty as all good ladies are taught to do. Love is for the poets, not for the peerage. Now, with her elderly husband dead, it’s time to marry again. Charlotte wants—needs—children. Given she’s no longer a blossoming flower, her pool of likely husbands is growing ever smaller. She studies the current batch of ton bachelors, those she knows are desperate for a wealthy wife, and decides to hold a party at her estate. The catch? This party is for men only, and at week’s end, one of her guests will be her fiancé.

Marcus Roberts, Duke of Sinclair, is all about duty suddenly finding himself the last of his male lineage. He agrees to accompany his friend to Lady Charlotte’s house party because finding a bride is imperative. Preferably a widow with children. His wife's death in the arms of his brother destroyed his faith in love—he'll marry for convenience only—he won't trust so easily again. All he needs is a bride who he is sure can give him sons. Imagine his shock at learning the only woman at the house party is a widow who is rumoured to be barren. He should leave but as he gets to know Charlotte, suddenly the idea of any of these men marrying her stirs the jealous beast.
more
Bookmark Rate Book
Amazon Other stores

The 'The Bachelorette' series

Similar books to 'The Seduction of Lord Sin'

More books like 'The Seduction of Lord Sin'   ❯

Buy 'The Seduction of Lord Sin' from the following stores: