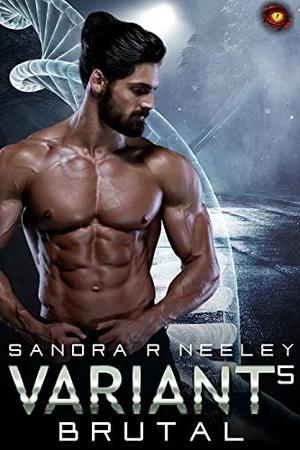 Brutal is one of many elite soldiers subjected to DNA manipulation against their will. His DNA was mixed with that of wild predators, making him Variant. He’s now head of security at Alliance, the Variant community they all live in. He’s dominant, and prides himself on control. He shakes his head, laughing at the antics of others like him when they meet their one female. Now he’s met Ginny, it’s not so funny anymore. She continually holds him at arm’s length. Ignoring her insistence that he stays away, he invites himself to a party she’s attending, and things go well — really well. Only now, after having actually claimed her, she refuses to answer his calls and messages. Either she’s gone missing, or she’s just done with him. Unfortunately, he believes the latter. All of his control means nothing when he discovers she’s been taken.

Ginny has worked all her life to keep her heart buried deep inside, untouchable by any and all. It’s not that she doesn’t want love, in fact she craves it. But she’s afraid. Her mother walked out on her and her father, leaving him a shell of the man he once was. After seeing her father fade away, she’s determined it won’t happen to her. To fill her days, she spends more hours than she should caring for others as a nurse in a very large hospital. Which is how she got involved with the Variant, and ultimately Brutal. She was ‘all in’ where Brutal was concerned until he made it clear he wanted a forever relationship. But she doesn’t do forever relationships. She does a couple nights and ‘it’s been nice to know you’ relationships. But suddenly, her world is turned upside down, and unfortunately the only person who can save her is the one she’s all but blocked from her life. Will he even notice she’s missing?

The doctor who created the Variant people now has Ginny in his grip. He intends to use her to further his advantage in his attempts to manipulate the Variant — if she survives. Dr. Waller has no regard for anyone’s life. Time is crucial, she’s been labeled a reward to the squads he maintains control over. Will Brutal be able to find her? And if he does, will she still be alive, much less his?

Warning: This book is intended for mature audiences. This book contains violence and abuse both real and implied, and sexual situations that may be disturbing for some readers. If you are offended by these subjects, please do not buy this book. While some aspects of this series and the beginnings of the world it is set in are dark, this series is ultimately a tale of survival, revenge, healing, and love.