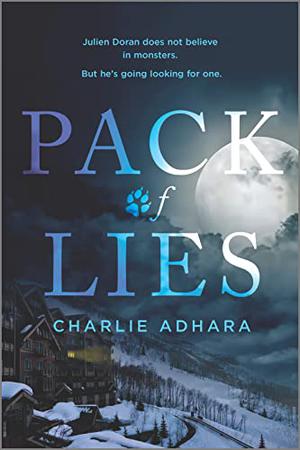 Julien Doran arrived in sleepy Maudit Falls, North Carolina, with a heart full of hurt and a head full of questions. The key to his brother's mysterious last days might be found in this tiny mysterious town, and now Julien's amateur investigation is starting to unearth things the locals would rather keep buried.

Perhaps most especially the strange, magnetic manager of a deserted retreat that's nearly as odd as its staff.

Eli Smith is a lot of things: thief, werewolf, glamour-puss, liar. And now the manager of a haven for rebel pack runaways. He’s spent years cultivating the persona of a flippant sophisticate to disguise his origins, but for the first time ever he’s been entrusted with a real responsibility—and he plans to take that seriously.

Even if the handsome tourist who claims to be in town for some R & R is clearly on a hunt for all things paranormal. And hasn't taken his brooding gaze off Eli since he's arrived.

When an old skeleton and a fresh corpse turn a grief errand into a murder investigation, the unlikely Eli is the only person Julien can turn to. Trust is hard to come by in a town known for its monsters, but so is time. As they're trapped together in a crumbling mountain lookout, their secrets will have to come out…or both of them may end up buried.

Similar books to 'Pack of Lies'

All books by Charlie Adhara  ❯

Buy 'Pack of Lies' from the following stores: